Hola Mohalla or Hola Mahalla or simply Hola is a Sikh festival that takes place on the first of the lunar month of Chet which usually falls in March. This, by a tradition established by Guru Gobind Singh, follows the Hindu festival of Holi by one day; Hola is the masculine form of the feminine sounding Holi.

Together the words “Hola Mohalla” stands for “mock fight”. During this festival, processions are organised in the form of army type columns accompanied by war-drums and standard-bearers and proceeding to a given spot or moving in state from one gurdwara to another. The custom originated in the time of Guru Gobind Singh who held the first such mock fight event at Anandpur in February 1701. 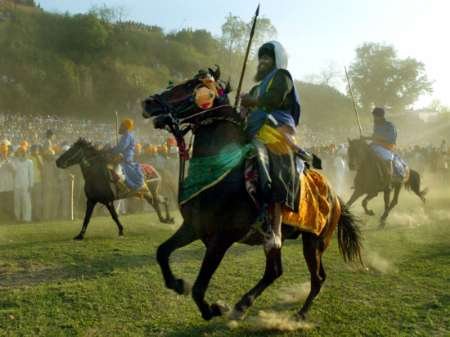 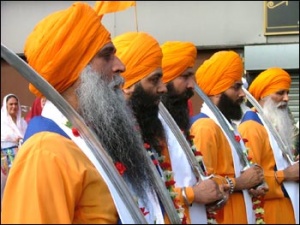 The foothills of the Shivaliks in Ropar district of Punjab‘s north-eastern region, especially around the historic townships of Anandpur Sahib and Kiratpur Sahib, have, since 1701 been playing host to Hola Mohalla. Recently, the Indian government accorded it the status of a national festival. The military exercise, which was personally supervised by the guru, was carried out on the bed of the River Charan Ganga with the famous Hindu temple of Mata Naina Devi in the Shivaliks as the backdrop.

There are also a number of Darbars where the Sri Guru Granth Sahib is present and kirtan and religious lectures take place. On the last day a long procession, led by Panj Pyaras, starts from Takhat Keshgarh Sahib, one of the five Sikh religious seats, and passes through various important Gurdwaras like Qila Anandgarh, Lohgarh Sahib, Mata Jitoji and terminates at the Takhat (Keshgarh).

The Festival of Hola Mahalla

(Based on an article by M S. Ahluwalia)

In our own times, developing countries like India have brought tourism into the forefront, owing to the twin advantages of employment generation and capacity to earn foreign exchange. Recent studies, however, have also pointed out the negative effects such as the cultural erosion (of ones own identity), materialism, increase in crime, social conflicts, overcrowding (of the tourists?) and environmental deterioration, which have not only proved counter productive in some cases but have also led to strong opposition, especially in the case of the sexual based-tourism as has developed in Tailand and other under-developed countries, including even India (which involves profit seeking adults enslaving the young and innocent children of many ‘third world countries”. The only remedial measures to this is the strict adherence to the development of community/religious tourism and its allied branches.

In this brief paper an attempt is made to study the prospects and impact of community/religious tourism and its potential to develop and prosper. The case study is related to the Sikh community’s celebrations of Hola Mahalla at Anandpur Sahib (the birth-place of the Khalsa in 1699) in Punjab, an event that coincides with the Indian festival of Holi celebrated all over North India. This study concludes that community oriented tourism, such as ones similar to Hola Mahalla, can bring economic benefits while promoting partnership with others even as we protect the unique Sikh cultural heritage. The paper briefly discusses the history of Hola Mahalla festival, which has been declared a State festival by the Government of Punjab. It also analyses the importance of community tourism and its impact on economic and socio-cultural environment vis-a vis the host community and tourism development.

This custom originated in the time of Guru Gobind Singh (1666-1708) who held the first march at Anandpur on Chet vadi 1, 1757 Bk (22nd February, 1701). Unlike Holi, when people playfully sprinkle colored powders, dry or mixed in water, on each other the Guru made Hola Mahalla an occasion for the Sikhs to demonstrate their martial skills in simulated battles. This was probably done forestalling a grimmer struggle against the imperial power following the battle of Ninnohgarh in 1700. Holla Mahalla became an annual event held in an open ground near Holgarh, a Fort across the rivulet Charan Ganga, northwest of Anandpur sahib.

Anandpur (lit. City of Bliss) is situated on one of the lower spurs of the Shiwalik Hills in Ropar District of Punjab and is well connected with the rest of the country both by road and rail. It lies 31 Kms north of Rupnagar (Ropar) and 29 Kms south of Nangal Township. Being one of the supremely important pilgrimage centers of the Sikhs it has been reverently called Anandpur Sahib. It was here at Anandpur that on Baisakhi of 1699, Guru Gobind Singh gave birth to the Khalsa and baptised the the original Panj Piare and inaugurated the order of Saint-Soldiers (holy warriors) who pledged their dedication to defend, not only Sikhs, but thir fellow countyymen and their religious rights as well, in the tradition of one of India’s greatest Martyrs Guru Tegh Bahadur who gave his life in the defense of the Hinduism on behalf of the Pandits of Kashmir.

The order of the Khalsa, at the wish of Guru Gobind Singh‘s would henceforth be distinguished by five symbols, called the Five ks, viz. kes (uncut hair), kangha (comb), kachcha (a pair of shorts), kara (a steel bracelet) and kirpan (sword) so that they could easily be recognized by anyone under attack. Sikhs were further instructed to live to the highest ethical standards, and to be always ready to fight tyranny and injustice.

Warlike sports of the Nihangs

Originally known as Akalis, the Nihngas or Nihang Singhs are endearingly designated as Guru’s Knights or the Guru’s beloved. They still carry the military ambience and heroic style that was cultivated during the lifetime of Guru Gobind Singh. Nihangs constitute a distinctive order among the Sikhs and are readily recognized by their dark blue loose apparel and their ample, peaked turbans festooned with quoits, insignia of the Khalsa and rosaries, all made of steel. They are always armed, and are usually seen mounted heavily laden with weapons such as swords, daggers, spears, rifles, shotguns, and pistols.