Like his elder brother Ajit Singh, he started training in the fighting skills (Gatka) as soon as he started learning the religious texts aged about 4 to 5 years. In 1699, when he was eight years old, he received holy Amrit at the rites of Khalsa initiation, called Amrit Sanskar. By the time it became necessary to leave Anandpur under the pressure of a besieging host in December 1705, Jujhar Singh, nearing the completion of his fifteenth year, was an experienced young warrior, strong and fearless.

He was one of the band that successfully waded through the flooded Sarsa rivulet on horseback and made good their way to Chamkaur by nightfall on 6 December 1705, with the adversary in hot pursuit. With little respite during the night, he participated in the next day’s battle warding off assault after assault upon the “garhi”, the fortified house in which Guru Gobind Singh Ji had, along with his 40 Sikhs and two sons, taken shelter.

As they ran out of ammunition and arrows, Sikhs inside split themselves into batches of five each who would go out one after the other to engage the besiegers in hand to hand combat. Jujhar Singh led the last sally towards the end of the day (7 December 1705), and laid down his life fighting near the place where he had earlier seen his elder brother fall. He was just 14 years old when he gave his life while his older brother was 18 years old when they gave their lives for their faith. Gurdwara Katalgarh Sahib in Chamkaur Sahib now marks the site.

Watching his brother Baba Ajit Singh attain Shaheedi, Baba Jujhar Singh desired to fight in the battlefield, as well, even though doing so meant certain death. He asked his father, “Guru Sahib, permit me, dear father, to go where my brother has gone. Don’t say that I am too young. I am your son. I am a Singh, a Lion, of yours. I shall prove worthy of you. I shall die fighting, with my face towards the enemy, with the Naam on my lips and the Guru in my heart.”

Guru Gobind Singh Ji embraced him and said, “Go my son and wed the life-giving bride, Death. May the Almighty be with you always” 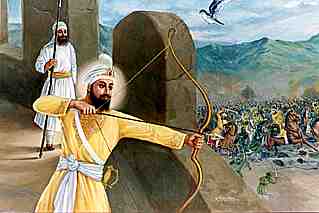 Guru Sahib gave blessings to Baba Jujhar Singh just like a father gives blessings to the bride on the day of her marriage. Guru added, “I asked my father to give his life for “dharam” (righteousness and justice). Today, what I told my father, I now tell you son.”

Bhai Himmat Singh and Bhai Sahib Singh (two of the original Panj Piarey) along with 3 other Singhs accompanied Sahibzada Baba Jujhar Singh . The Mughals were shocked at what they saw. It looked as if Ajit Singh had come back.

Dead bodies lay everywhere. Baba Jujhar Singh chose to attack another section of the enemy. He had observed the enemy and chose to attack the section who were showing more aggression against the Sikhs in the mud-fort then the rest of the enemy. Initially, the enemy did not have any courage to formulate an attack against this second unit after the fury of the force displayed by Ajit Singh’s unit.

To them this appeared like a repeat of the same disaster that had befallen them an hour or so ago. They had not even had time to recover from the previous shock and now they had a second wave of the same enormously vibrant energy. This time the enemy was driven even further back; many just took flight as they thought that the Sikh numbers must have increased and so many of the enemy desserted the battlefield. This new force of six Khalsas soldiers killed many hundreds of the enemy; many simply ran away.

The enemy were stunned by the heavy force and thrust of this second attack and had little choice but to retreat. The Khalsa unit created a huge void in the enemy territory and a small circle of about 35 metres within the enemy ground was under the control of the Sikhs. No one had the courage to enter into this circle of control. Anyone who entered this area of command was immediately challenged and quickly extinguished. The Khalsa unit, with their backs to the centre of this circular area attacked the enemy courageously and with vigour at the perimeter of the controlled region.

The Guru watched this development with pride and gratefulness to the Almighty and he knew that the Sikhs had learned the lessons of warfare well and would soon join the many hundreds of Sikh martyrs who had attained the highest honour of Dharam. The Almighty had indeed blessed the Sahibzade and the Sikhs with true bravery and deepest understanding of the Guru’s message.

Slowly, due to the huge number of the enemy, they eventually assembled around Baba Jujhar Singh. He was now surrounded and had a Neja (spear) in his hand. Wherever the Neja hit, the enemy was destroyed. He also used a Khanda (double-sword), with which he killed the enemy as a farmer mows down his crop. Guru saw that Jujhar Singh was being surrounded and the opportunity to kill the Mughal soldiers was decreasing. 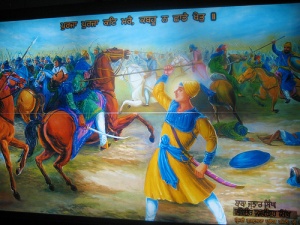 So Guru Sahib fired volleys of arrows in the area around the Sahibzada giving ‘protection fire’ to the Sikh soldiers. The person providing protection fire must be very skilful and precise because if the target is missed, people on the same side can be killed giving rise to ‘casualty from friendly fire’. Guru sahib continued to give protection cover with arrows for almost 30 minutes, but none of the 5 Singhs or Baba were hit or injured by the arrows. Baba and the 5 Singhs demonstrated the Sikh concept of one equalling the bravery and courage of “Sava Lakh” (125,000) humans.

Baba Jujhar Singh eventually was able to break the ring of the Mughal army soldiers surrounding him. However, due to the huge number of enemy soldiers, Baba eventually attained Shaheedi but died a hero’s death in the fight against tyranny and falsehood.

“That person alone is known as a spiritual warrior, who fights in defence of religion. They may be cut apart, piece by piece, but they never leave the field of battle. 22.” (Ang 1105, SGGS)

This was truly a sign of a dedicated warrior! By the time Baba Jujhar Singh had attained Shaheedi nightfall had arrived and the moon could be seen in the sky. Guru Sahib wrote in his composition, the Zafarnama:

“What trust can I have on your oath on Quran? Otherwise, why should I have taken this path of taking up the sword?” (Line 23, Zafarnama)

During the night, Bhai Daya Singh and Bhai Dharam Singh (two of the original Panj Piarey) along with Bhai Maan Singh and other Singhs remained in the fort of Chamkaur Sahib. There were a total of 10 Singhs left. Now the Guru-roop Panj Piarey (Five Singhs) gave Hukam to Guru Sahib to leave the fort, which the Guru could not refuse. However, Guru Sahib did not leave quietly. On leaving, Guru Sahib blew his horn and stood on high ground and clapped his hands three times saying “PeerÚ Hind Rahaavat” (“The “Peer” of India is Leaving”).