Bhai Gurdas is considered the first interpreter of Gurbani. His writings are considered key to understanding the Sikh holy scriptures. He wrote 40 vars (ballads) and 556 kabits (both forms of Punjabi poetry). These writings are considered the best specimens of Sikh literature and philosophy. He also had the opportunity to be the scribe of Guru Granth Sahib or Adi Granth, the holiest Sikh scripture that was compiled by Guru Arjan Dev Ji, the fifth Sikh Guru, in 1604.

The exact date of birth of Bhai Gurdas is not known but it is somewhere between 1543-1553 A.D.

Bhai Gurdas came back to Punjab after Guru Ram Das Ji left for heavenly abode. He had the opportunity to study and observe Sikhism closely in the company of Guru Arjan Dev Ji. Bhai Gurdas also played a key role in the construction of the Harimandir Sahib (Golden Temple Amritsar).

This was a very difficult time for the fifth Guru as his own brother Pirthi Chand was very jealous of him. At the same time the Muslim ruler Jahangir had become jealous of growing popularity of Sikhism and Guru Arjan Dev Ji. He wanted to put an end to it. This was a period of great challenges and difficulties for the Sikhs. Bhai Gurdas was the first custodian of the Akal Bunga (Akal Takhat Sahib). Baba Buddha Ji was the first Granthi of the Harimandir Sahib. During the time of Guru Har Gobind Sahib Ji, Bhai Gurdas went to many far away places like Kabul, Kanshi, Banaras, to spread the message of the Guru. The Sikh congregation was so impressed by Bhai Gurdas they that elevated a Gurdwara in his memory in Kabul.

Bhai Gurdas passed away some time between 1629 and 1637 AD at Goindwal. Guru Har Gobind Sahib Ji personally cremated his body. Bhai Gurdas had the good fortune to have had the the company of four Gurus.

The compilation of Guru Granth Sahib was completed in 1601. It took almost 11 years to complete this task. Bhai Gurdas not only wrote the Adi Granth as dictated by Guru Arjan Dev Ji, he also supervised the writings of four other scribes, namely Bhai Haria, Bhai Sant Das, Bhai Sukha and Bhai Manasa Ram who were writing various Sikh scriptures.

Bhai Gurdas was not only an interpreter of Sikh scriptures and preacher of Sikhism, he was a walking encyclopaedia of Sikhism. 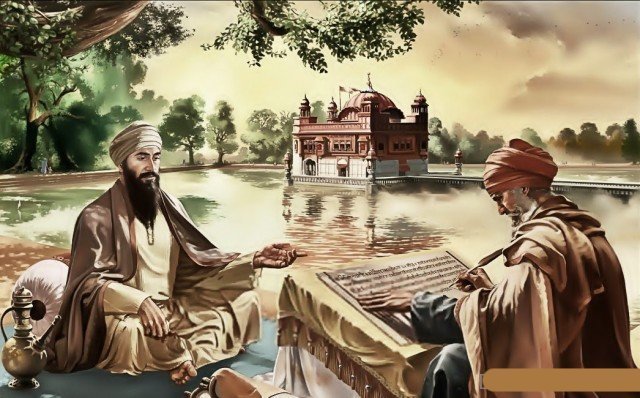 Bhai Gurdas was a great scholar of Persian and Sanskrit and of comparative religion. He was a poet of superb beauty. His most famous compositions are Vars, (Punjabi ballads, 40 in number).

Bhai Gurdas as a Sikh Historian

Bhai Gurdas has documented the Sikh history in his writings and has solved some of the historical riddles about Guru Nanak Dev’s Ji visit to Mecca, Medina, and other parts of the world:

Then Baba (Guru Nanak Dev Ji) went to Baghdad and camped outside the city. In addition to Baba Nanak, who was a Divine personality, Mardana, the musician also went along.

Bhai Gurdas had documented the martyrdom of Guru Arjan Dev as follows:

To achieve martyrdom, Guru Arjan Dev Ji immersed in the God-like ocean like a fish. The Guru merged into the heavenly light like the moth that immolates itself after seeing the light.
.. I sacrifice my life to Guru Arjan.